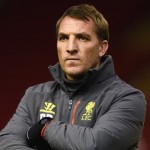 It has been reported that Liverpool boss Brendan Rodgers has branded “disgraceful” Arsenal fans abuse of Arsene Wenger.

The French tactician was recently abused by his own supporters after a defeat at Stoke City while a banner calling for his departure was held up in the away section at West Brom.

Last season he was filmed and ridiculed for tripping over at a railway station after Arsenal’s defeat at Anfield.

“Some of the personal stuff he takes is disgraceful,” said Rodgers.

“He has been an iconic figure, a statesman.”