It has been reported that Liverpool boss Brendan Rodgers is not listening to Jose Mourinho’s claims of fielding a weakened line-up tomorrow. 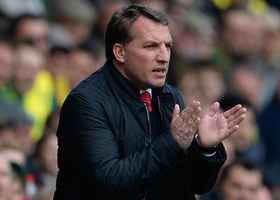 Mourinho suggested that, with a finely-balanced Champions League semi-final second leg at home to Atletico Madrid on Wednesday, he would field a weakened side at Anfield, but Rodgers paid that no attention.

“There are certainly no mind games on behalf of him to me, he knows me well enough to know it wouldn’t bother me one iota what he says or does.

“I’ve seen some stuff saying a weakened team will be played, but that is hugely disrespectful to their players if they are deemed to be the weaker ones in the squad.

“Whatever team they put out will have cost more than ours and will be more experienced.

“It is difficult because they have the game in the week and there is no doubt if they played the same team on Sunday and Wednesday there is a cost.

“You saw it with Manchester City. When they played us it was a really intense game, and I think Manuel (Pellegrini) felt on the Wednesday when they played Sunderland they had a real cost and ended up drawing the game.”