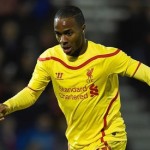 It has been reported that Liverpool boss Brendan Rodgers has likened two-goal Raheem Sterling to Arsenal star Alexis Sanchez.

The England international star struck twice in their Capital One Cup win at Bournemouth.

Rodgers told BBC 5 Live: “Raheem Sterling was brilliant. I played him as a striker, but you get different types of striker.

“He’s more of an Alexis Sanchez when he plays as a striker – he’s not going to pin the defender. He plays in the spaces and he’s got the speed to get in behind. A couple of great finishes and I’m very pleased for him.” I Hope Arsenal Can Still Win The Title – Robert Pires