It has been revealed that Liverpool boss Brendan Rodgers is pleased with Jordan Henderson’s progress over the last year. 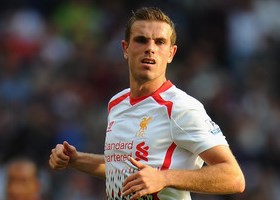 The 23-year-old England international winger has played every minute of Liverpool’s Premier League games this season, and Rodgers said: “I’ve been so impressed since I’ve been here, Jordan has become better and better.

“His level, tactically, is very good. He’s one that wants to improve all the time. If I didn’t think he could play the role and function in the roles properly I wouldn’t put him there so it’s great credit to him.

“At the end of last season, he played as a false winger from the left, coming inside and got goals. He played his first season here wide on the right. He’s played as a wing-back, wide in a midfield four.

“In all the systems, what you get from him is a work-rate and a mentality and Jordan has got quality. I don’t see it as a hindrance for him, I see it only as a positive. I know he’s really enjoying playing.

“Wherever he plays there’s no drop-off – you still get the same. He’s one of those players that you could play him at right-back, which I’ve done sometimes, and he’s got forward well.

“He’s a really good young footballer whose understanding of the game is improving all the time. That allows him to play in a number of different positions.”