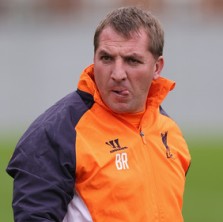 It has been revealed that Brendan Rodgers is ready for his return to Swansea City.

The Liverpool boss has already lost to his former club, at Anfield a month ago, when they ended Liverpool’s defence of the Capital One Cup.

Visiting fans cheered former midfielder Allen but chanted “We don’t need you any more” at Rodgers.

The Liverpool boss does not expect to encounter much hostility but accepts, with points at stake, there may not be a warm welcome.

“It is a real special place Swansea. I spent two fantastic years there and had a wonderful rapport with the supporters,” he said.

“The club was brilliant for me and hopefully I gave them something back while I was there.

“I never said I was going to be there for many years but it took a truly unbelievable club like Liverpool to draw me away.

“Whatever reception I get is irrelevant, the important thing is I know the good people there and I am sure time will heal any bad thoughts.

“But we are going there to keep our (seven-match) unbeaten in the league going.” Liverpool Confident Daniel Sturridge Will Be Fit For Norwich Clash