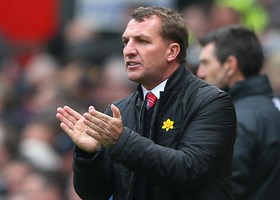 However Rodgers maintains the stance that his side are still improving, playing down suggestions that they are a genuine title contender.

“It’s exactly the same (as I’ve said before),” he told Sky Sports regarding his feelings on Liverpool’s title pursuit.

“I think we’re a developing side. We’re probably a year ahead of where we’ve been but that’s testament to the players and how quickly they’re adapting to the methods.

“The biggest difference is that we’re believing all the time. You come here, you win 3-0 playing like we did today and it’s another statement in terms of where the team is going.

“I repeat (what I said) before, we could win the next nine games and still not win it but certainly our focus now will be to get ready.

“The only expectation is to win the next game and that’s what we’ll look to do. Everyone’s got tough games.

“We’ve had a tough game today, we’ve done our job and that’s all we can concentrate on. If we continue to do that, let’s see where it takes us.”