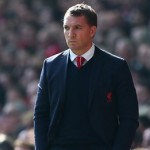 Reports are out claiming that Phil Thompson has implored Brendan Rodgers to alter his system if Liverpool are not performing well during a match.

The Reds have been beaten in their past two Premier League outings by Manchester United and Arsenal using a 3-4-2-1 formation which their opposition has picked apart.

Former Anfield ace Thompson is not opposed to Rodgers’ game plan but he feels the manager needs to be more malleable when the game is not going his way.

“The system is okay, but certain teams have sussed it out, and Brendan needs to be brave enough to switch to 4-4-1-1 – or whatever he thinks is best at that moment – to stop these games getting away from them,” he told Sky Sports.

“As we seen in the Manchester United and Arsenal games, if you wait to half-time to change a system that is being exploited, then you’re liable to fall behind before the break.

“By not reacting, the opposition gains confidence and, if they’re good enough, they’ll score. It happened at Swansea too, although Liverpool rode their luck and ended up winning that game.

“By reacting with a change early on, you put the onus back on the opposition. When you change, they have to come up with something new too.”