It has been reported that Brentford boss Mark Warburton hailed the performance of Jon Toral after his hat-trick in victory over Blackpool. 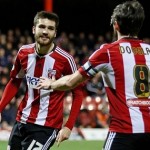 Toral is on-loan from Arsenal.

“I’m delighted to have that relationship with Arsenal and delighted Jon is embracing it.

“He’ll get better and better and I have no doubt Jon will play in the Premier League.

“I met with Arsene recently and he asked me if he’s got the potential to play in the top flight. I’ve got no doubt he has.” Arsenal, Chelsea To Do Battle For AS Monaco’s Powerful French Midfielder