Brown Ideye has admitted that he has spoken with Nwankwo Kanu about life at West Bromwich Albion. 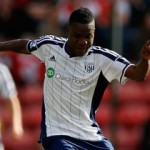 The Nigeria international, after making his debut in the stalemate with Southampton, told the WBA website: “I spoke with Kanu, once or twice in a week. He’s a great guy.

“He told me to be myself and try to do my best on the pitch, to score goals so that hopefully the fans and the club would be behind me.

“He just told me to give my best in every game and try to get my head down and listen to what the manager has to say and also what my fellow players are telling me.”