Arjen Robben scored his 100th goal for Bayern Munich as his side extended their lead at the top of the Bundesliga to 12 points after a 2-0 victory over Freiburg at the Allianz Arena. 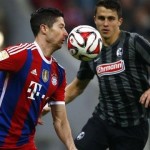 Robben’s first-half goal followed by a tap-in from Thomas Mueller helped seal the victory and allowed Bayern Munich to move to 42 points for the season, 12 ahead of second-placed Wolfsburg.

It took Pep Guardiola’s side 41 minutes to open the scoring, but it was well worth the wait as Robben completed a fine move instigated by playmaker Xabi Alonso.

The Spanish midfielder played a delightful lobbed pass to Franck Ribery, who found Robben with a cushioned header and he slid the ball into the back of the net. Arsenal The Most Difficult Opponent We Could Have Got! – Muller