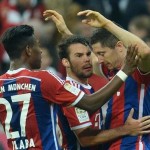 Arjen Robben and Thomas Muller both impressed for Bayern, both bringing excellent saves from Roman Weidenfeller, saving a number of shots from Robben cutting in from the right, and one on one against Muller.

But Dortmund were not cowed. They started brightly too, with Henrikh Mkhitaryan sending a rasping effort just wide, and Aubameyang bringing a save from Manuel Neuer as he approach goal.

It was Marco Reus who opened the scoring, glancing an excellent header to the far post after an Aubameyang cross.

Mats Hummels did not make it out for the second half, and was replaced by Neven Subotic. Dortmund managed to hold on against Bayern pressure until Robert Lewandowski lashed in a brilliant shot as a ball fell to him 20 yards out.

With five minutes left, Subotic dragged Franck Ribery to the ground to concede a penalty that Robben calmly dispatched.

Arsene Wenger Responds To Klopp : I’m Not A Specialist In Music!