Bayern Munich winger Arjen Robben sparkled in a 4-0 demolition of Cologne on Saturday for their 1,000th victory in the Bundesliga that put them 10 points clear at the top. 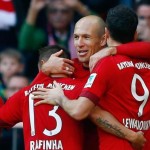 Dutchman Robben, out since September 3 when he was injured in the Netherlands’ 1-0 loss to Iceland in a Euro 2016 qualifier, slotted in from close range after a back heel from Robert Lewandowski.

Chile international Arturo Vidal drilled in from Kingsley Coman’s darting run and cutback as the Bavarians extended their record-breaking start to the season to 10 wins in 10 games.

Bundesliga top scorer Lewandowski then got on to the score sheet himself with a glancing header in the 62nd minute, after Douglas Costa whipped in a free kick, taking his league tally to 13 goals in 10 games.

Thomas Mueller added their fourth goal with a well-taken penalty as Bayern moved to 30 points, with second-placed Borussia Dortmund, who are on 20, in action on Sunday.