Borussia Dortmund’s Pierre-Emerick Aubameyang struck twice as last season’s runners-up beat Hanover 96 3-2 on Saturday for their first win in three Bundesliga games that kept up their hopes of a European spot next season. 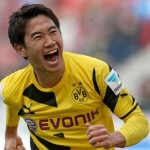 Dortmund bounced back from their Champions League exit to Juventus this week to move up to 33 points, five behind Augsburg, who are sixth and occupy the last place for Europa League qualification.

Dortmund went ahead with their first goal in four matches when Aubameyang netted in the 19th minute to score his 11th goal of the season.

They dropped their guard a little later, allowing Lars Stindl to level from close range.

Hanover were down to 10 men early in the second half when Leonardo Bittencourt, a former Dortmund player, got his marching orders following a second booking.

Dortmund made the extra man count instantly, with Shinji Kagawa tapping in after good work from Jakub Blaszczykowski and a Marco Reus assist.

The Japanese then chipped a ball into the box and Gabon international Aubameyang connected with a diving header for his second goal before Stindl also got a second to set up a nervous finale.