It has been reported that Burnley boss Sean Dyche has explained holding back on-loan Manchester United defender Michael Keane. 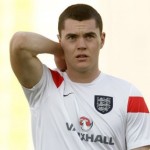 Keane was impressive for their 1-1 draw with Aston Villa.

Dyche said he had been straight with the Stockport-born centre half about his role so far, but also insisted he didn’t want to spent too much time talking to the defender.

“I’ve just told him that’s life as a professional footballer,” Dyche said. “I don’t do nonsense with these players, I tell them exactly how it is.

“If anything now I think there’s too much feedback to players, everyone talks about coaches speaking to the players, the chance to self learn now has diminished slightly, particularly with the younger players.

“The player has a game that doesn’t go their way and they get immediate feedback from the coach and then they feel better about themselves so they go away and don’t overthink it.

“Self learning is a massively important thing for young players. We balance that with obvious feedback, DVD analysis, but we’re trying to find a healthier balance with that, I think it’s gone too far one way in coaching, where the feedback is enormous and the player doesn’t have to think for himself.”