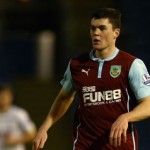 Reports are out claiming that Burnley defender Michael Keane has no regrets leaving Manchester United.

Keane, 22, signed for Burnley on loan and the deal was made permanent in January for around £2million.

“Once you start playing regularly in the Premier League, that is all you want to do,” said the centre-half.

“I could have gone back to United but I would be sitting on the bench and with the money they’ve got, they will probably buy one or two centre halves so that would have put me further down the pecking order.”