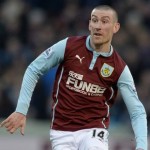 Reports are out claiming that Burnley midfielder David Jones has pinpointed Alexis Sanchez as the danger man ahead of his side’s clash against Arsenal this weekend.

Burnley will be looking for a positive result when they square off against the in-form Gunners at Turf Moor and despite the odds being firmly stacked against them, the Clarets will certainly be hopeful of claiming something from the clash.

However, it will most certainly not be easy against an Arsenal side currently on a run of seven consecutive victories and Jones suggests his side need to particularly negate the threat of Sanchez in order to stand a chance.

“He did play well at the Emirates,” Jones told the Lancashire Telegraph. “He’s quite small in stature and very quick, and he can turn on a sixpence so it’s very hard to pick up players like that. Even if you read where he’s going, you can’t always stop him.

“He’s a very sharp player, and pace and skill will always be a threat. We won’t just concentrate on Sanchez, they have plenty of guys who can hurt you. But he’s a top player so concentration has got to be key for us – as we demonstrated against (Manchester) City and against (Tottenham) Spurs.”