It has been reported that Burnley co-chairman John Banaszkiewicz insists Danny Ings is not for sale. 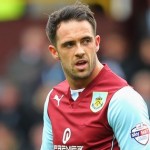 Ings has been linked with Southampton this week.

“I haven’t had anything at all from them or received anything from Southampton,” Banaszkiewicz said in the Burnley Express.

“We haven’t had any formal approach but regardless it’s in our interests to keep him because he’s been a great asset to the club. We’d like him to stay, he’s still contracted to us and we’d like to maintain that for next season.”

Banaszkiewicz added: “We absolutely want to keep our key players. We hope we’ll be using a lot of the team for next season. It’s all about team synergy to enhance our prospects. We do obviously need to build the squad ready for the Premier League as well.

“We want to keep our best players and that’s proven with Kieran Trippier. He’s one of the most sought after players at the club and we managed to get that over the line.”