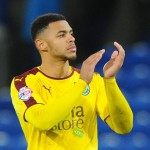 Gray says the trip to Emirates is a dream come true.

“I was a real Arsenal fan as a kid and me and my friends were fans of the Invincibles team,” he said.

“That got me hooked and I was always Henry when we played. He was the best striker around and that was my position.

“Ian Wright is another inspiration. He was a bit before my time, but he came to Burnley as well.

“If I could do half of what he’s done, it would be great for my career.

“It will be massive for me to play against Arsenal, especially after coming from non-league.”