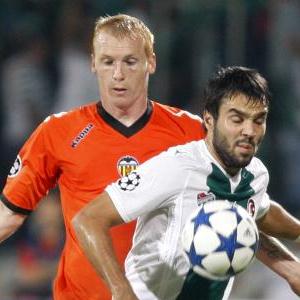 Valencia made a storming start to their Champions League campaign with a 4-0 rout of Bursaspor in Group C on Tuesday, giving the Turkish side a demoralising introduction to Europe’s premier club competition.

The Spanish side top the group after Manchester United were held to a 0-0 draw by Rangers.

Tino Costa put the visitors ahead in the 16th minute with a powerful long-range shot into the top corner of Dimitar Ivankov’s goal.

Four minutes before halftime, Aritz Aduriz doubled Valencia’s lead, knocking in a header after a free kick from Costa rebounded off the post and silencing the home fans at the Ataturk stadium in the northwestern Turkish city.

Bursaspor briefly burst into life after two substitutions in the second half, bringing on midfielder Turgay Bahadir and Sercan Yildirim who brought some energy to their attack.

But the home fans’ hopes were snuffed out in the 68th minute when the Bursaspor defence failed to clear and the ball fell to Pablo Hernandez who slotted a shot past Ivankov to make it 3-0.

Substitute Roberto Soldado added to Bursaspor’s disappointment in the 76th minute, capping off a fine run down the right wing with an angled shot into the net.