It has been reported that Borussia Dortmund have jumped to the head of the queue for Servette superkid Lorenzo Gonzalez. 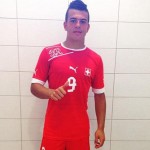 The 15 year-old striker has been likened to Manchester City star Sergio Aguero and rated the best junior player to come through the Switzerland youth system in years.

Manchester United and Real Madrid have been chasing Gonzalez this year.

However, BVB have stolen a march on all rivals, says BILD, after Gonzalez visited the club’s training ground.

Gonzalez turns 16 in April, which is when he is expected to leave Servette.