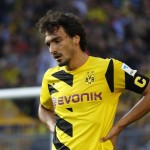 Reports are out claiming that Borussia Dortmund chief Michael Zorc insists Mats Hummels isn’t on his way to Manchester United this summer.

It’s been claimed that the German international will be cashed in by BVB at the end of the season as they prepare for a campaign without Champions League football.

But Zorc has dismissed the reports, particularly with United circling.

“According to reports, Manchester United has taken off the gloves (initiated negotiations) at least 13 times,” scoffed Zorc.

“Hummels is an incredibly important player for us, so we continue to plan with him.”