Reports are out claiming that Borussia Dortmund coach Thomas Tuchel insists there’s been no decision made over the sale of Ilkay Gundogan. 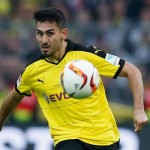 The German international midfielder rejected a contract with the Bundesliga club this week and has been linked with Arsenal, Liverpool, Manchester United and Manchester City.

“I believe it’s not the case that there isn’t a chance he’ll stay,” Tuchel was quoted as saying by Sky Sports.

“The importance of Ilkay in this form is undisputed, but one can imagine that the interest from other clubs is very high.” Arsenal’s Season Should Have Been Much Better – Alexis Sanchez