Reports are out claiming that Borussia Dortmund have absolutely no intention of selling Pierre-Emerick Aubameyang. 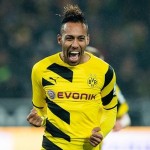 The 26-year old striker remains on the radar of Arsenal but the German Bundesliga giants are not looking to offload last season’s leading scorer.

It is believed that the Gunners were set to table a €40million (£28.4m) offer for Aubameyang but Dortmund sporting director Michael Zorc simply has no plans to part ways with the Gabon international.

“[We are] not interested in selling Aubameyang,” he told Kicker.

Former Saint-Etienne ace Aubameyang, who is contracted until 2018, starred for BVB last term by scoring 25 goals in 46 appearances in all competitions.