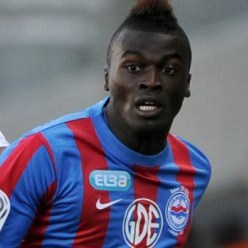 Arsenal’s bid for Caen youngster M’Baye Niang has been confirmed.

Caen president Jean-Francois Fortin has revealed that Arsenal have made an official offer for Niang, 17, after he impressed during a loan spell earlier in the summer.

“Arsenal made me a proposition, but other clubs are interested – two in England and one in Italy,” Fortin told L’Equipe.

“There will be an issue here for a fortnight before the matter is resolved.”