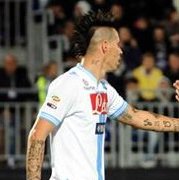 A second-half goal from Marek Hamsik took Napoli up to second in Serie A, just two points behind league leaders Juventus, thanks to a 1-0 win at Cagliari.

Walter Mazzarri’s side struggled to impress and, after hitting the post early on, the Partenopei spent most of the time defending.

Cagliari hit the woodwork twice and looked more likely to score until Hamsik pounced on a loose ball to earn the visitors all three points and take them above Inter Milan and Fiorentina.