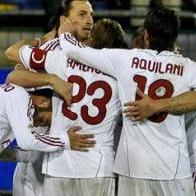 Milan returned to the top of Serie A thanks to a 2-0 win over Cagliari at the Stadio Sant’Ella Stadium.

An own goal from Francesco Pisano and a sharp finish from Zlatan Ibrahimovic proved the difference between the sides, though manager Massimiliano Allegri will be equally as grateful to centre-half Thiago Silva, who dealt brilliantly with the Cagliari front three.

Milan goalkeeper Christian Abbiati returned after a month out with a shoulder injury. Philippe Mexes and Taye Taiwo started in defence, whilst Robinho began up front with Ibrahimovic and Alberto Aquilani replaced Clarence Seedorf in midfield.

The match was the rearranged fixture from the first week of the season, where the whole schedule was postponed because of a players’ strike.