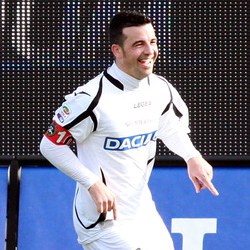 Udinese kept their hopes of Champions League football alive with four goals in 14 minutes to see off Cagliari at the Stadio Sant’Elia.

Despite plenty of the chances on goal, the first goal of the afternoon came after 42 minutes through Mehdi Benatia.

Andrea Cossu and Andrea Lazzari combined for the first attempt of the game, the latter’s touch going just wide after five minutes.

Di Natale went even closer in the 16th minute when his curled free-kick from 25 yards was well saved by Michael Agazzi.