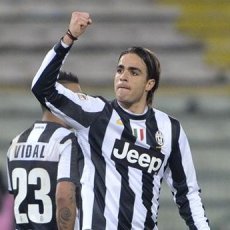 Juventus came from behind to set a new league record of 94 points in a calendar year thanks to a 3-1 win over Cagliari.

Mauricio Pinilla put the Sardinians in front in the 16th minute, but a brace from Alessandro Matri, after Arturo Vidal had missed a penalty, turned the game around.

Cagliari were on their travels again, choosing Parma this time as their base for the final match of 2012 after their Is Arenas home was once again denied a safety certificate.