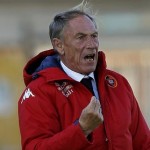 It has been reported that Cagliari coach Zdenek Zeman has revealed he came close to moving to Barcelona earlier in his career.

The 67 year old is regarded one of the most innovative coaches to have worked in Serie A.

“Years ago I was called by Barcelona, we talked, but then didn’t reach an agreement,” Zeman told Marca.

The biggest criticism aimed at the Coach is that he has not won any major trophies in his career.

“Winning is not important, a Coach must think of improving the players at his disposal.”