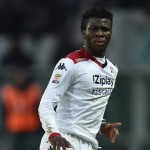 Reports are out claiming that Cagliari have set their asking price for young midfielder Godfred Donsah.

The exciting Ghanaian talent has been tracked by Manchester City, Liverpool and Tottenham this season, while AS Roma are also keen.

Gazzetta dello Sport revealed that Roma chief Walter Sabatini has been contact and was informed by Cagliari it will take €10 million to sign Donsah.

However, the youngster has made it no secret playing in England is a dream for him.

“Manchester City, Liverpool, Tottenham and Arsenal have made official enquiries about him.

“For now, they are scouting him, and there is nothing concrete.”