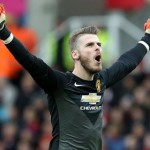 United’s Spanish stopper De Gea has attracted considerable praise for his performances this season, leading many to suggest the 24-year-old could be set for a move back to his home country.

But Calderon told talkSPORT: “We already have the best goalkeeper in the world, which is Casillas.

“We also have just bought Keylor Navas. I don’t see any need to get any other goalkeeper.

“De Gea is perhaps also one of the top five goalkeepers in the world but Casillas can still be at the top for three or four years. I don’t see any need [for De Gea].”


Ozil Confident Arsenal Can Win The Premier League This Season