Arsenal defender Calum Chambers believes that Danny Welbeck’s early impact is due to the welcome he’s had from teammates and staff. 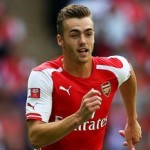 The former Manchester United striker hit a hat-trick in their Champions League win over Galatasaray.

“He has settled in really well,” said Chambers.

“When I first came, I said the bunch of lads here and the staff are so welcoming to a new person that it is hard not to settle in quickly to be honest.”