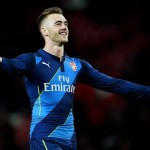 Reports are out claiming that Arsenal defender Calum Chambers is happy with how manager Arsene Wenger has guided him this season.

There was a point before Christmas when Wenger admitted to overplaying Chambers but he has emerged stronger from that spell.

“He (Wenger) speaks to me after games and has been very relaxed with me,” says Chambers to the Mail on Sunday.

“He’s a fantastic manager as he has shown by the players he has brought through. I’ve gained a lot of experience in a short time. It has helped me get used to different types of football.”