Reports have emerged claiming that Arsenal defender Calum Chambers started in a central midfield role for U21’s in their 2-1 win over Brighton & Hove Albion. 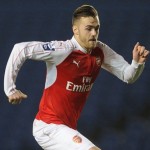 As the Gunners continue their search for an internal solution to the injury of Francis Coquelin, Chambers was thrown into the centre of the pitch for the clash at The Amex.

Manager Arsene Wenger has earlier claimed that Chambers can fill in for Coquelin, who is facing three months out with a knee injury.

Ben Sheaf and Donyell Malen scored for the Gunners after Connor Goldson had given the lead to Brighton as Chambers performed admirably in the holding midfield role. Hugo Rodallega Linked With A Move To Arsenal