It has been revealed that Manchester United winger Jesse Lingard has said that United players can’t let the rustrations of the fans affect their performances on the pitch. 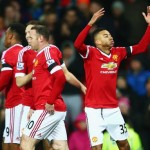 United’s displays have been booed by supporters at Old Trafford on numerous occasions this season but in the wake of Tuesday night’s 3-0 win over Stoke City, Lingard believes the outside pressure cannot be felt by the playing group.

“It’s hard, but we have to concentrate on the game,” said Lingard when asked about fans’ reaction to the 1-0 defeat to Southampton 11 days ago.

“We can’t let the fans influence how we play. We are on the pitch. We have to play the game as we see it at the time.

“We showed great character to do that in the last game and were unfortunate not to get the result against Southampton but we bounced back against Derby and against Stoke.”