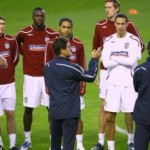 Bridge confirmed on Thursday that he would not be available for selection for this summer’s tournament, claiming his position in the England squad was now “untenable”.

Bridge’s decision related to the affair between his former Chelsea team-mate John Terry and Vanessa Perroncel, the mother of his young son. Bridge cannot contemplate sharing a dressing room with Terry, who is such an integral figure in Capello’s squad, even though he has been stripped of the captaincy following his much-publicised indiscretions.

However, Capello will try to talk the Manchester City defender round before he selects his 23-man squad for this summer’s extravaganza.

“I was flying back from Milan when Wayne Bridge announced that he would not be with us for the Egypt match and also in South Africa for the World Cup,” said Capello. “It surprised me, but I respect the decision of all the players.

“But the door is always open for him. We have time, there is still three months until I will decide my final squad for South Africa. I hope that Wayne Bridge will be with us at the World Cup, but I respect his decision.”

David Beckham Backing England To Shine At The World Cup