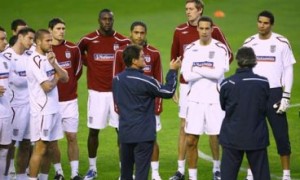 England manager Fabio Capello has revealed that managing England will be his last job and also said that he never wants to coach his native Italy.

Capello, now age 63, said that the England national team will be the last football side that he coaches.

However he said that he would not want to coach the Italian national side as it does not interest him.

Ronaldinho Determined To Make It To The 2010 World Cup FIFA Defend Luis Suarez Ban : He Should Get Treatment!