Middlesbrough won a penalty shoot-out against Manchester United 3-1 after a 0-0 final score from 120 minutes of action. 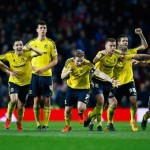 Middlesbrough’s reward for knocking United out of the Cup is a fifth-round tie at home to Everton.

Championship promotion-chasers Boro triumphed on penalties following a goalless draw at Old Trafford, with Tomas Mejias saving from Wayne Rooney and Ashley Young while Michael Carrick blazed his effort over.

They now face a visit from an Everton side who also needed spot-kicks to beat Norwich on Tuesday night.

Arsenal’s conquerors Sheffield Wednesday head to Stoke while the third Championship side left in the draw, Hull, will travel to Manchester City, who thumped Crystal Palace 5-1.

Liverpool, who secured their first win under Jurgen Klopp by beating Bournemouth 1-0, face more south-coast opposition in the shape of Southampton following the Saints’ 2-1 victory over Aston Villa.

The ties will be played during the week commencing November 30.