Anthony Martial stepped off the bench and scored his fourth goal in four matches as Manchester United strolled into the fourth round of the Capital One Cup with a 3-0 win over Ipswich. 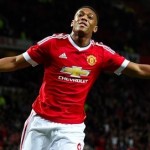 United’s 4-0 defeat to MK Dons in this competition last year is regarded as the worst loss of Dutchman Louis van Gaal’s tenure and there was no way he was going to let Ipswich record a similar result on Wednesday.

The United boss sent out a near full-strength side, and they spared little energy dispatching an Ipswich team that contained 11 changes.

Andreas Pereira, making his first start, netted his maiden strike for the club – a dipping free-kick from 20 yards – before Martial raced through and prodded the ball home in injury time to continue his excellent start to life at Old Trafford.

Given that Ipswich had 10 free signings and one player who cost just B#8,500 in their starting line-up, Van Gaal’s B#207million star-studded XI was always going to come out on top.