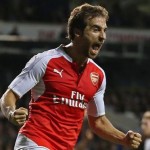 Mathieu Flamini’s last two League Cup games have both come against Tottenham at White Hart Lane, but they were 3,164 days apart.

Spurs have been eliminated by Premier League opposition in the previous nine years (excluding 2008 when they won the competition).

Spurs have lost for the first time in five home League Cup games.