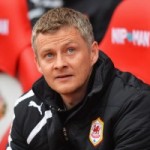 Reports are out claiming that Cardiff City owner Vincent Tan will stand by manager Ole Gunnar Solskjaer in next season’s Championship.

The Mail on Sunday reported that Tan was unimpressed at Cardiff’s form after sacking Malky Mackay.

However he accepts that the former Manchester United star deserves a crack at redeeming himself with his players.