Reports are out claiming that Arsenal have failed with an opening offer for Cardiff City goalkeeper David Marshall. 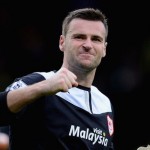 The Daily Mail reported that Arsenal have had an initial offer of around £6m rejected by Cardiff for Marshall.

The Scottish goalkeeper won rave reviews last season despite the South Wales club being relegated, and Arsene Wenger needs competition for Wojciech Szczesny after the departure of Lukasz Fabianski to Swansea.