Reports are out claiming that Cardiff City hope to keep hold of goalkeeper David Marshall. 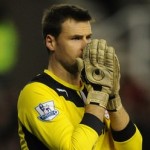 The Gunners have been widely reported to be weighing up a sizeable bid for City’s No.1 having seen the former Celtic star branded a £15m player.

But WalesOnline says no club has yet stepped forward to table a formal bid for City’s player of the season.

It is thought there have been enquiries for the 11-cap ace, although it is not clear which clubs have made their interest known to Bluebirds officials.