It has been reported that Arsenal fullback Carl Jenkinson has admitted that the swoop for Alexis Sanchez has the club “buzzing”. 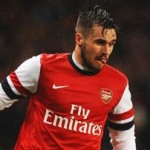 The Chile international arrives from Barcelona with a reputation as a top quality striker and Jenkinson believes he can help the FA Cup winners target more success.

The England international said on Arsenal.com : “He is world class and they are the sort of players you want to see at the club. The squad are buzzing as much as the fans, because if you are going to push on as a club and really compete for things, you need to sign top players,”.

“We have done that with him for sure – it is a fantastic addition.

“He’s quick and direct, he can play up front and on the wing, and he is very dynamic. He will definitely fit the Arsenal style of play.”

Jenkinson added: “Once you have got one (trophy), you want to experience it again, so fingers crossed we can compete on all fronts this season.

“We have the squad and we are signing players like Sanchez, so I don’t see why we can’t.” Arsenal Legend Insists Wayne Rooney Should Be Played In Midfield