It has been reported that Carl Jenkinson insists he is only thinking of West Ham United even though parent club Arsenal are experiencing an injury crisis in defence. 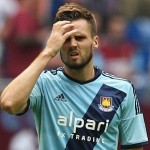 The 22-year old England international right-back is on a season-long loan with the Hammers but could have been set for regular game time at the Emirates Stadium after summer signing Mathieu Debuchy underwent ankle surgery.

With teenager Calum Chambers the only other recognised right-back, things may have worked out well for Jenkinson in north London but he insists joining the Hammers will be vindicated after he receives regular game time in the Premier League.

“At the end of the day, I can’t think too much about Arsenal, I have a job to do here,” he told the Newham Recorder.

“It has been a frustrating start but I am feeling fit and strong.

“I know Arsenal have a bit of an injury crisis over there at the moment but it was the boss’s (Arsene Wenger) decision to allow me to go on loan.

“I think in the long term it will be the best thing for me and the club for sure.”

Since arriving at Upton Park, one-capped England international Jenkinson has made two substitute appearances for Sam Allardyce’s side.