Reports are out claiming that West Ham United defender Carl Jenkinson says they’ll be up for their clash with Tottenham. 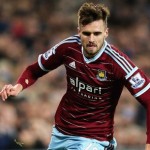 The England international will be wary of Spurs striker Harry Kane.

The on-loan Arsenal defender told whufc.com: “He’s been excellent this season. I know him quite well from playing together in the England U21s.

“He’s a nice lad and good footballer, he works hard and he’s reaping the rewards of that. He deserves all the praise he’s getting at the moment. I think he’s going to be a big player for England in the future, I hope we keep him quiet this weekend.”