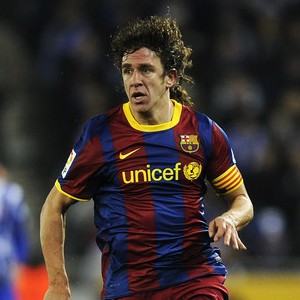 It has been confirmed that Barcelona captain Carles Puyol will miss Tuesday’s Champions League game against Arsenal.

The World Cup winning defender has been out of action since the middle of January with a knee problem.

Following Barca’s 1-0 victory over Real Zaragoza on Saturday, assistant coach Tito Vilanova said: “He’s a lot better and we didn’t play him tonight more out of precaution than anything else. We’ll see how he is in training on Sunday and Monday.”

However, it was decided on Sunday that he would not be fit for the match and, with Gerard Pique absent through suspension, Barca will be without both their first-choice central defenders.