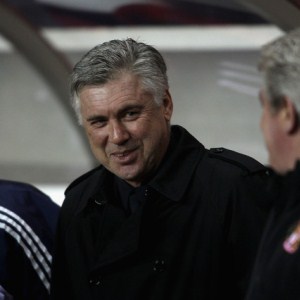 Carlo Ancelotti believes that the five-match touchline ban handed to Sir Alex Ferguson by the Football Association is too harsh.

The 69 year old Scotsman was handed the ban and a £30,000 fine for his verbal attack on referee Martin Atkinson at Chelsea last month.

However, the former AC Milan boss believes the punishment does not fit the crime and questioned what the governing body is hoping to achieve with the ban.

Ancelotti said : ”I think that, my opinion, is that Ferguson has always had good behaviour and I think five games now is too much,”.

”There is no reason he has to be out for five matches and I do not think that can change their strength and the power of Manchester United.”

He added: ”I know what he said after the game. Obviously it was not good behaviour but five games is too much.”

Ferguson criticised Atkinson’s failure to send Blues defender David Luiz off for fouls on Javier Hernandez and Wayne Rooney after the Brazilian had already been booked, then expressed comments the FA disciplinary panel felt had questioned the official’s integrity.

”You want a fair referee, or a strong referee anyway – and we didn’t get that,” said Ferguson in the aftermath of the 2-1 defeat. I must say, when I saw who the referee was I feared it. I feared the worst.” Chelsea’s Lucas Piazon Determined To Make His Mark At Reading Ryan Giggs Open To Managing Wales In The Future