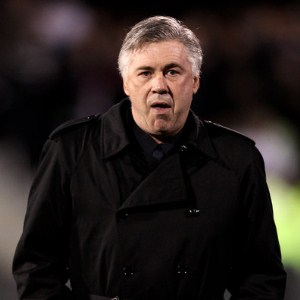 Chelsea boss Carlo Ancelotti is confident that his side can overtake Manchester United at the top of the table having seen first-hand how a comfortable advantage can be thrown away.

The Italian tactician was in charge of Juventus in 2000 when they were overtaken by Lazio despite having held a nine-point advantage with eight games to go.

Chelsea, who had trailed United by 15 points at one stage, have now closed the gap to just six points and, as Chelsea have yet to visit Old Trafford in the league, Ancelotti hopes United will wilt under the pressure.

The former AC Milan boss said : “I lost a title nine points up with eight games to go,”.

“It can happen. It’s not a nice feeling. It was very difficult to think two months ago that we could stay with the lead so for this reason, at this moment, we are happy.”

However there are a lot more games to play with Chelsea hosting Tottenham in Saturday’s late kick-off, and United then head to Arsenal on Sunday afternoon.

Ancelotti said : “If we are able to win against Tottenham, I think we can put more pressure on Manchester United in the game against Arsenal,”.

Should Chelsea win all their remaining games and United suffer two defeats, the title could be decided on goal difference and, with the Blues currently on 37 and United on 39, Ancelotti is eager to ensure his side take their chances.

“It can happen,” he said when asked about the prospect of the teams finishing level on points. “It was important for us to score three goals [against West Ham].”