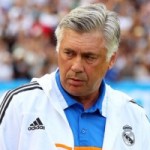 Real Madrid coach Carlo Ancelotti has confirmed that the club is in talks to buy Tottenham Hotspur winger Gareth Bale.

Ancelotti said at Real’s training camp in Los Angeles : “It is difficult to talk about Bale because at the moment he is not a Real Madrid player,”.

The former Chelsea and PSG boss said : “I believe the club is in talks to find a solution and we will see what happens,”.

“I am not used to talking about players who are not in my team and it would not be right to do so.”

According to media reports in Spain and England, Real are leading the chase for Bale and are prepared to offer Spurs what would be a world-record fee of £85 million for the 24-year-old.

It would eclipse the fee of around £80m the world’s richest club by income agreed to pay Manchester United for Portugal forward Cristiano Ronaldo in 2009.

Henry Says Benzema Is The Future Of France